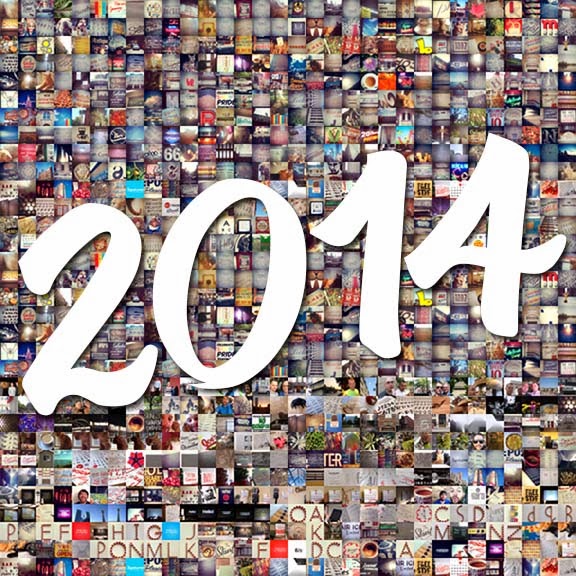 2013 marked my second full year of freelance graphic design. Where 2012 was a year of beginnings, 2013 was a year of growth, filled with many opportunities to learn new skills, meet new people, and hone my craft. As in previous years (2011, 2012), I think it would be fun to share what made this year so special.

In February, I launched a year-long lettering project called 12 in '13 for '14. My goal was to hand-letter a calendar throughout the year and release it in time for the holidays. This project grew out of my growing passion for hand-lettering and sign-painting, as well as a love for documenting the creative process from beginning to end. (In case you can't handle the suspense, here is the finished result.)

March was steady with client work, but I also took time to continue with my lettering. One exciting development was this cut and fold alphabet.

As the days started to get longer (and warmer) in April, I started training more vigorously for a 10K marathon. I also did a fun infographic about relaxation for Dr. Chris Roberts, a commission for a professor (and friend) at the University of Calgary, and updated my portfolio with some other new work. One piece I was proud to highlight was my asterisk glyph created for Font Aid VI: Aster Affects, a collaborative effort to raise money for victims of Hurricane Sandy. You can purchase the font here.

May was busy. On the 1st, I launched 9 new pieces in my online shop. I was so pleased with the reception - I even got a mention on Quipsologies! I also took March's cut and fold alphabet to the next level, which was accepted to participate in Creative Type Five, an annual curated exhibition of typographic artwork from Toronto illustrators, artists and graphic designers.
On May 12, I participated in the SL 10K marathon. Even though I did not set any records, I still raised $1260 to help kids with cancer go to summer camp.
I also joined my grandparents to celebrate their 50th wedding anniversary. This was my gift to them.

In June, The Urban Etiquette Project was translated into Portuguese, thanks to the help of a journalist at the Folha de São Paulo, a major Brazilian newspaper.
I was also honoured to connect with Uppercase Magazine this year; first with a mention on the blog, and then in issue #19 of their print magazine. Thanks again Janine, Erin and Jocelyn!

The highlight of July was a trip to Paris, France. 1119 photos, 14 days of perfect weather, 17 expressos, a lot of bread, 3 quiches, 2 lemon tarts... it certainly was a vacation to remember. I put together a special photo blog with all of my favourite moments: http://paristopher2013.blogspot.ca/

In August, I took a leap and participated in my first flea market – the Parkdale Flea – with the help of my good friend, Tanya. It was a blast!
I was also thrilled to show off some fancy album artwork, featuring my Razorblade typeface.
The Urban Etiquette Project was featured in Flare magazine - so cool!

While working away at client work in September, I also did two extra special commissions for Ian and Robyn.

In October, The Toronto Etiquette Project got some more print coverage - this time in the Globe and Mail.
I rediscovered my love of chalk lettering , and did some fresh chalkboards for my local food store, Pusateri Fruit Market.
But the most exciting part of October was the birth of Ligatures, a new type club from Toronto. Along with the help of two very talented friends – Kyle & Leslie – we got our type appreciation group off the ground and held our first meeting in October, with subsequent monthly meetings in November and December. Watch for more cool type events in Toronto throughout 2014!

On November 1st, I launched 9 new pieces in my shop, just in time for the holidays. They included the 12 in '13 for '14 hand-lettered calendar, as well as a set of hand-lettered holiday cards.
I also attended the DesignThinkers conference in Toronto as the Roving Reporter for Uppercase Magazine. Over the two-day event, I was able to participate in 14 (!) events & lectures by designers and creatives from around the world. Here are the reports from Day 1 and Day 2. Thanks again Janine for this amazing opportunity!
I also shared a special Deco-flavoured wedding commission I did back in the summer for Alex and Jeremy. Congrats!
And as a response to the Rob Ford fiasco at Toronto City Hall, I created a new online project called We Are Not Ford. The project got coverage on City News and Global National.

After my success with the Parkdale Flea in August, I decided to do two more craft markets in December. The first was the Gladstone Flea (posts here and here) and the second was the 2-day City of Craft, which garners nearly 5000 attendees each year (posts here and here).
I also shared an exciting new poster for the Music in the Barns special Cinerama concert, happening January 24. Get your tickets today!
And for no reason as all, I created an entire alphabet out of Lego blocks on Instagram. Should I make a print?

This year of freelance life has certainly made me more confident, business-minded designer. The feeling of uncertainty that predominated Year One has diminished (for the most part). I have learned to recognize the ebb and flow of fluctuating client work, and dedicate every down beat to self-improvement and project creation. It has also become increasingly important to think beyond myself – beyond my needs – and find ways to help others. Doing good feels good.

I have a few exciting things brewing for the year, including another little blog post about lessons from 2013, and of course, more lettering projects. Please check back soon!

This magical year wouldn't have been possible without the love and encouragement from family, friends and clients. Thank you to EVERYONE who purchased a print, bought a calendar, donated to my 10K run, shared my blog links, liked my photos on Instagram, visited my at the flea market, sent me a heartfelt email. You empower me. I am truly blessed to be able to do work I love each day.

May your new year be the happiest!