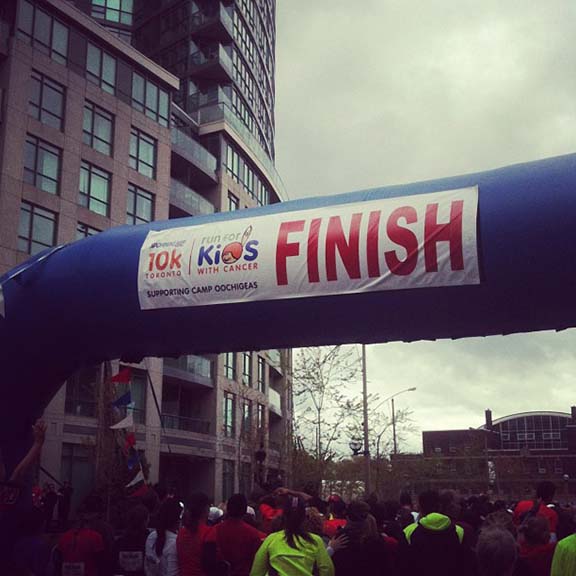 For the second year in a row, I participated in the Sporting Life 10K Run in Toronto, which raises money for Camp Oochigeas, a camp for children with cancer.

I only reached one of my goals this year.

Back on March 28th, I felt a strange twinge in my right shin, so I checked in with my family doctor. After several tests through the month of April – an xray, an ultrasound, and nuclear bone scan (!) – the sports doctor confirmed that the twinge I felt was not shin splints (a common condition for runners), but a tiny stress fracture on my right tibia. I found this out last Wednesday, four days before the race.

The treatment for a stress fracture is no running for 6-10 weeks.

After consulting with the sports doctor, he said that based on the date of the injury, the progress my healing, and my current level of my shin pain, I could try running the 10k, but must stop immediately if I feel any pain. He warned that a stress fracture can easily turn into a compound fracture, which would be bad news.

Up until this morning, I didn't know if I was going to be able to run. I thought of walking the entire distance if need be - there's no shame in that. I told myself I would decide when I got to the start line based on how my body felt. When the whistle blew at 8:20am, I started walking and increased the speed slowly over course of the first kilometre. For the first 8km, everything was feeling okay.

Then right at the 8km mark, just as one of my favourite songs came on my iPod, I felt a moderate twinge in my knee/shin. It took me about half a second to realize that that was my body's signal to stop. So for the last 2km, I walked briskly, and passed under the finish line as the timer struck 1:09:49.

I only reached one of my goals this year. But the goal I did reach still blows my mind. With the unbelievable support of friends and family from across the country, I raised 3X last year's total: $1260! This is enough money to help five kids with cancer go to camp - how amazing is that?! I can't thank each of you enough for your contributions and encouragement.

This year was an exercise in listening to my body and learning my limitations. Being stubborn and ambitious, I really really wanted to run the full distance today and beat my personal record. But it was deeply humbling to accept the limitations I was given, and focus on the true purpose of the run, which had nothing to do with me, but rather, the lives of children fighting with cancer.

This was all summed up perfectly by a inspirational quote I received in my inbox first thing this morning: