Four months ago, Toronto's historic Maple Leaf Gardens opened its doors to the public for the first time in over a decade. Like many people in downtown Toronto, I was drawn to the new Loblaws supermarket grand opening event on November 30, 2011. And like many people who appreciate urban revitalization projects (vs. demolition of history in favour of something ultra modern), I was in awe. As a food store, I had never seen anything like this before - part old, part new, 100% massive.
The following week, I found myself sitting in the new Loblaws cafe, enjoying an espresso and soaking up the warm sunlight pouring in the south windows of the store. Looking across the vast 86,200 square foot interior and 21 foot ceilings (!), I could not get over how impressive this food store was. From the eye of a former theatre designer, I was delighted by the use of space, scale, and lighting to create a magnificent multi-use environment. The contrast of ghostly concrete walls (presumably as old at the 1931 building) and the sleek, sanitary stainless steel counters was stunning. And as a graphic designer who lives in colour palettes and breaths typography, it was impossible not to fall in love with the graphic design, signage and merchandising choices made throughout the store. It was at that moment that I wanted to learn more about the project.
After speaking to the marketing manager about snapping a few photos and getting more information about the typography used in the store, I was subsequently put in touch with Loblaws' external PR firm, and ultimately connected with Mark Landini, Creative Director of Landini Associates in Australia. He and his team were responsible for all of the interior and graphic design for the Loblaws at Maple Leaf Gardens project. In a design brief about the project objectives, Landini summarized: "…we tried to put the 'super' back into supermarket, creating an exciting and interesting place dedicated to the celebration of food… we wanted to create a very strong and urban design while paying homage to the history of Maple Leaf Gardens in a vibrant and living way." Mark generously took the time to share his creative insight on the typography used this stadium-turned-supermarket for me, and I am happy to share his responses below.
CR: One of my favourite things about Toronto is the rich architectural history from the Art Deco period, and the press release mentions the importance of paying homage to the historical influences of the 1930s-era Maple Leaf Gardens edifice. How does this relate specifically to the typographic styles in the signage throughout the store?

ML: The building is both striking and imposing primarily because of its scale and brutality. "It's brutally beautiful". When we first viewed it, most of the interior was being removed, but it was its size that impressed us as well as it's urban location. So scale became something that seemed to be part of the language that we should use. That was a starting point - that, and the urban location which also influenced our approach to signage and materials too.
CR: I think the melange of over-sized signs around the store are spot-on and work perfectly with the grandeur of the space. Can you provide any insight/background on the typographic inspiration for these areas of the market?

ML: The inspiration for scale came from the building but other elements were influenced by how signs have been simply made or applied for years, primarily in an urban context. Many of these materials are used in (and are materials of) the city, but not of supermarkets, so we felt that the store should belong to the city, visually.

ML (cont.): Much of the directional and departmental signage is outsized to ﬁt within the scale of the building. Many of these were inspired by what you might see in a city street. Each area uses a different signage type from the battered tin of the bakery, the timber of the sushi, the impressed concrete of the deli, the bent copper plumbing tube [of the pizza & pasta station] and neon light of the grill [and canteen] to the super graphics on the perimeter painted over tile, CFC sheet and plywood sub-straits.

CR: There is a stencil font used prominently through the store merchandising and promotional material which has a distinctly industrial feel. What is this font, and does it have a story behind it?

ML: ... the stencil font that we found applied to the [former arena] stairwells had a great utilitarian feel about it, and also the simplicity of its application was something that we wanted to retain generally in many of the new elements. We did reuse this font quite literally and it has become part of an information font family that we have adapted for headings and signage. This font is now documented in the new "standards" that we have created for other agencies to use, which is why it is appearing in other places like the the promotional ads and website.

CR: Even though this is a corporate grocery chain, it does not feel like any other Loblaws I have visited. Did you have to follow any Loblaws corporate brand guidelines, or did you have 100% free reign with the design / typographic choices?

ML: There were no guildlines that we had to follow; in fact, we even refined the identity, modernizing and simplifying it a little, but this is normal. Our brief was to "reinvent" not to "evolve" so we were handed pretty much a clean slate with many of the guiding principles coming from the location more than what Loblaws had already done. That said, they have a history of using scale in their signage both internally and externally which we love and so we felt that there was a natural connect here.
CR: The art featured around the store is superb and definitely gives the store added visual interest. Were the artists or artisans who made special contributions to the store (ie. murals) given any direction about their use of typography or lettering?

ML: Some were. The seat sculpture for example was an idea that we had and as such had a hand in. Of the other two main murals the one in the cafe was a recreation of one from the old site, whilst the one behind the checkouts we created to localise the space but also to brighten and cheer up this part of the customer journey.

CR: This was clearly a huge undertaking. Were there any challenges to meeting this store's typographic and signage needs?

ML: Our main challenge was to keep it as unthematic and simple as possible. Not to dominate the merchandise too much but to try and find a balance that was both in keeping with the buildings history but also it's new use. All displays are product led and product intensive and we have avoided display for display sake. Also, we wanted to do something new in this vernacular. The building demanded it and our client asked that we do something fresh so the challenge was to meet both of these briefs.

CR: What is your favourite design or feature of the store, typographic or otherwise? Anything you'd like people to see or know that one might overlook?

ML: No one single thing as I'm very happy with how it all hangs together. I like how the various elements that make up the whole work as one. I love the contrast between the old uncovered building and the new more engineered elements of steel and glass. I'm delighted that the strong colour palette does not overpower the food but makes it a warm, friendly but also a passionate place. But none of this would be possible if the lighting was not so special. For that we have the Loblaws' team to thank and Mark Schembri in particular. It's rare that a client has the vision to capture what you have imagined and for me the lighting is the real hero (after the food and the people, that is).

A tremendous thank you to Nicholas, Jacqueline, Karen, Patrick, Mario and Mark for making this possible. All photos property of Christopher Rouleau (unless otherwise specified) and taken with permission by Loblaws. Please request permission to repost. Thanks!
■ 3/30/2012 Tags: architecture, art deco, awesomeness, editorial, photos, signs, toronto, type around T.O, typography 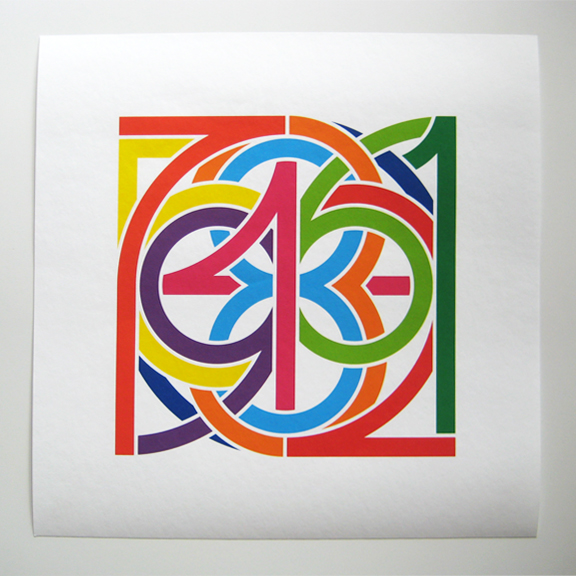 After its unveiling a couple weeks ago, my first Numbers print (the companion piece to the Alphabet Print #1) is now available on my BigCartel site. These 18" x 18" number posters are ink jet printed in Toronto with black water-based ink on 180gsm ultra white matte cotton-based art paper.

Special thanks to Raymond at Front Print in Toronto for his patience in helping me source the perfect paper stock, and to Ted Rouse for the referral - I am so happy with the results!

Know someone who needs a little colour on their walls? Spread the word, or purchase your limited edition copy today!

Thanks in advance for your support. 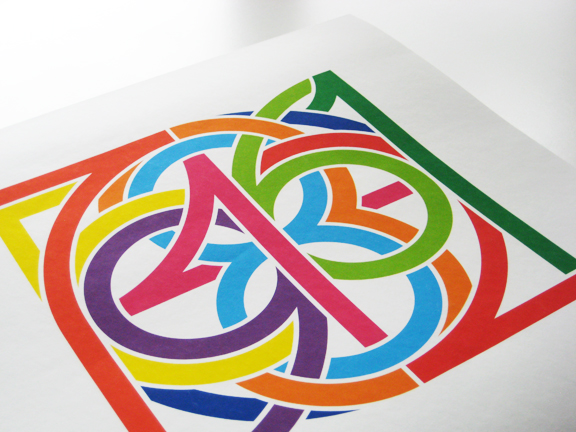 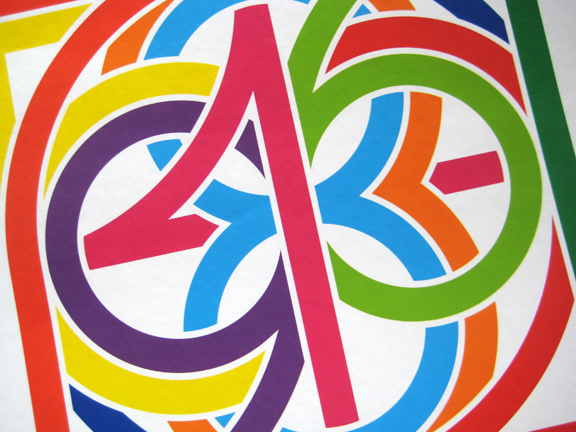 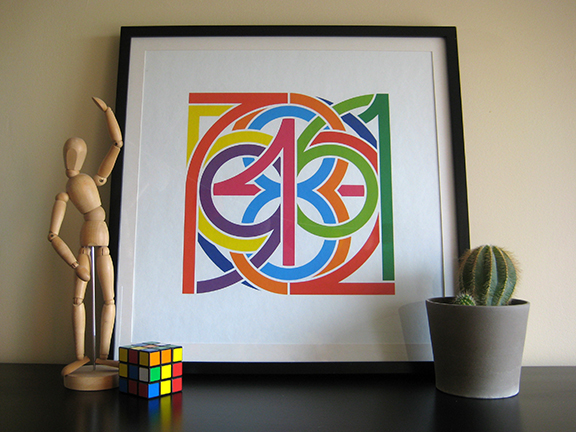 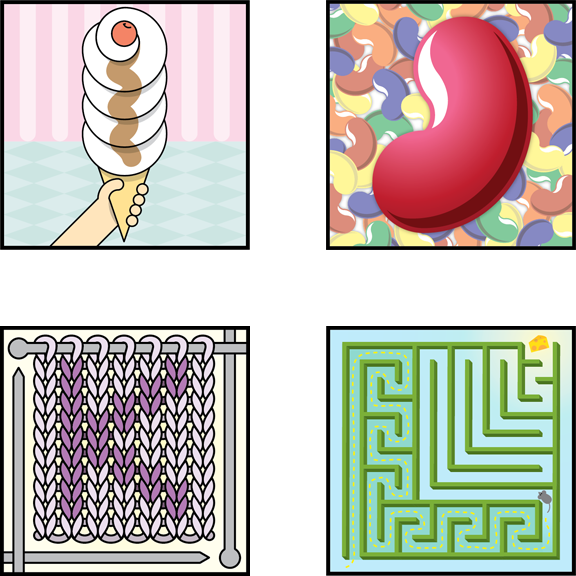 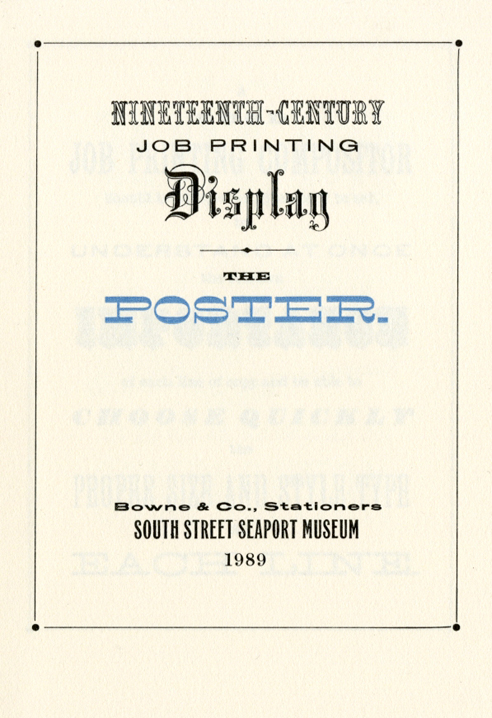 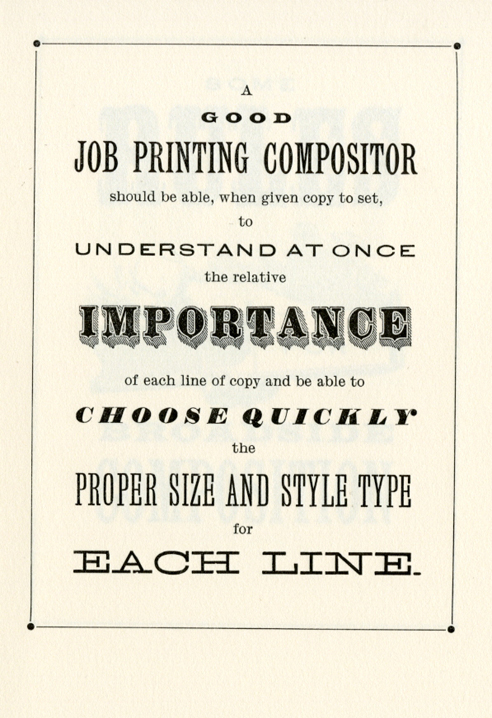 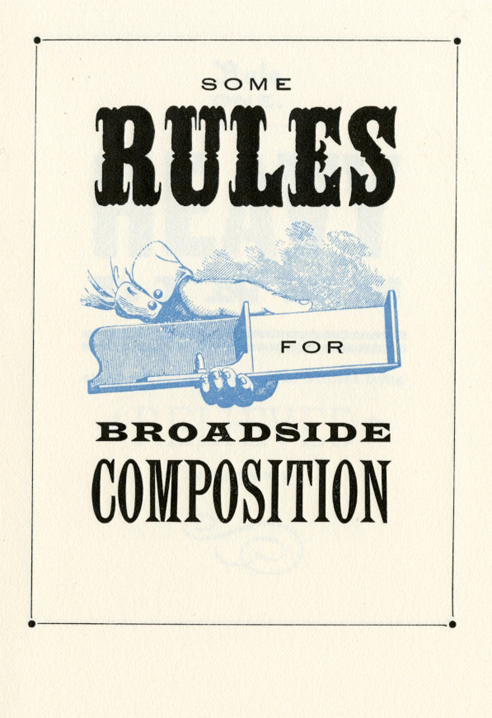 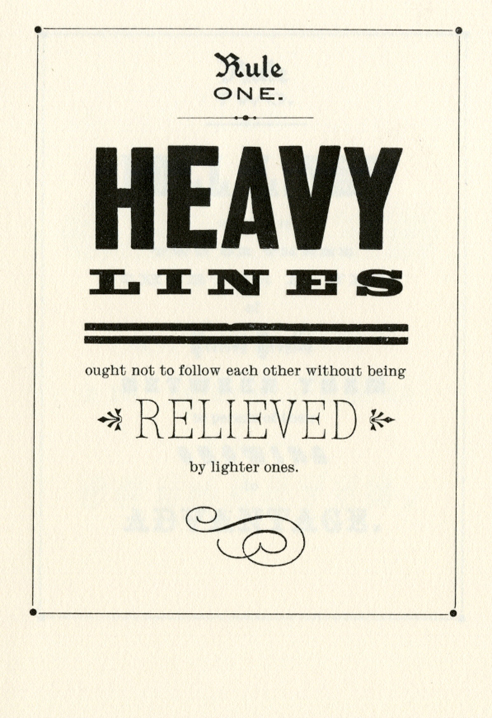 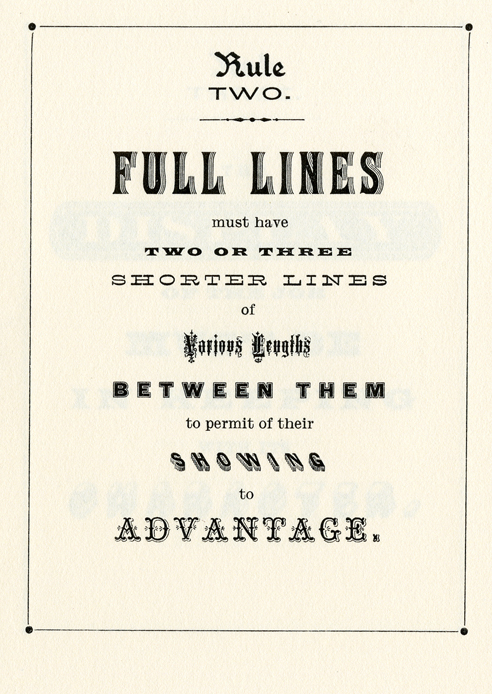 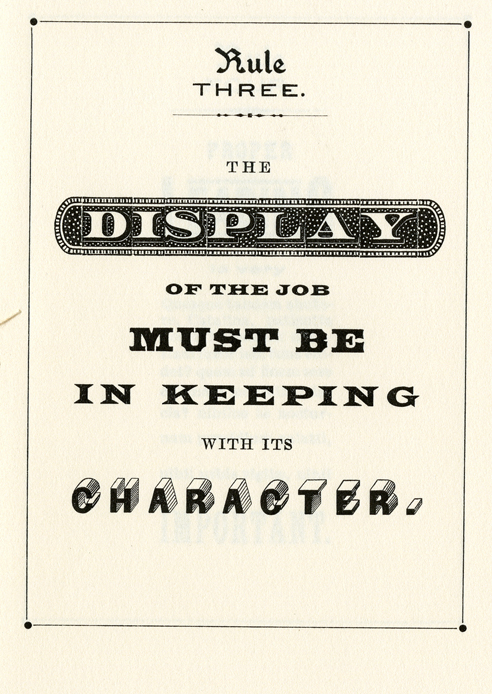 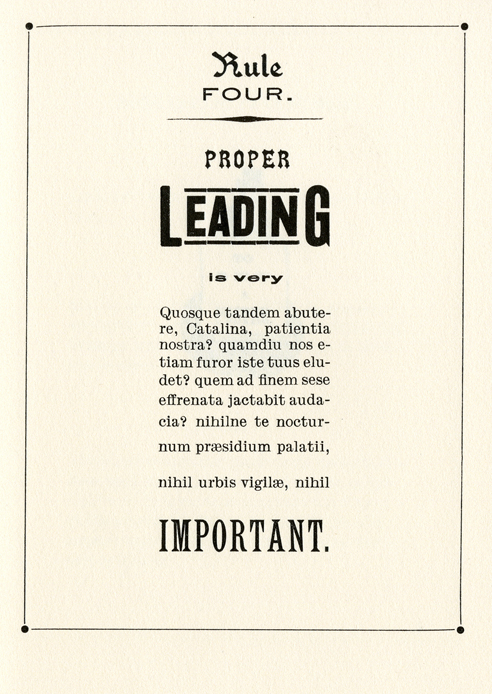 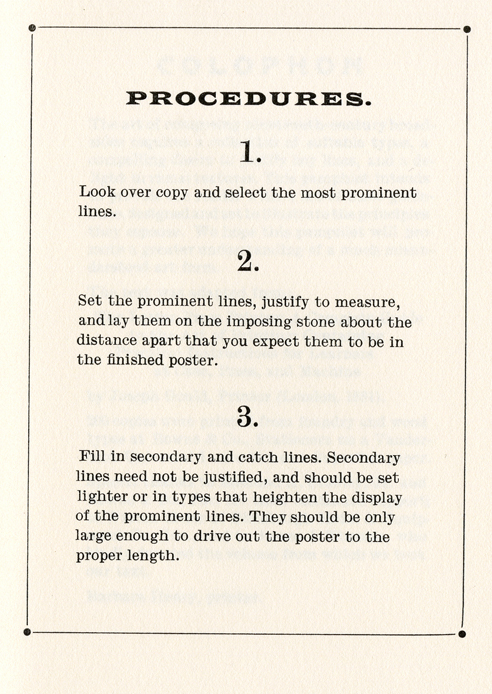 "Nineteenth Century Job Printing Display - The Poster", circa 1989 (adapted from "The Letter-Preess Printer: A Complete Guide to the Art of Printing; Containing Practical Instructions for Learners at Case, Press and Machine", circa 1881)
(via Imprint - thanks Tanya!)
■ 3/22/2012 Tags: antique, awesomeness, books, typography, vintage 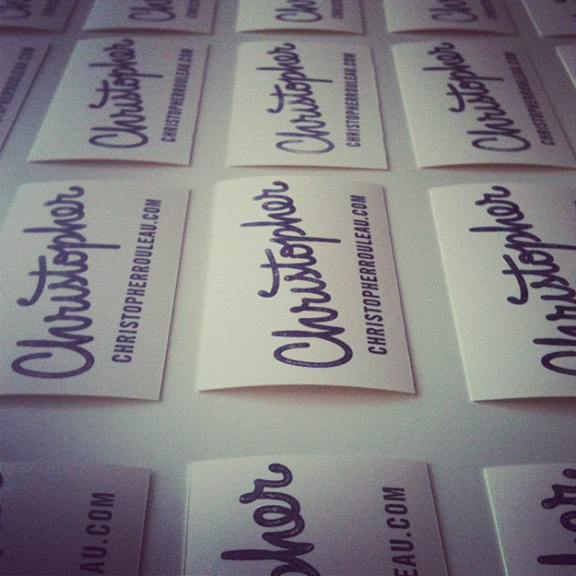 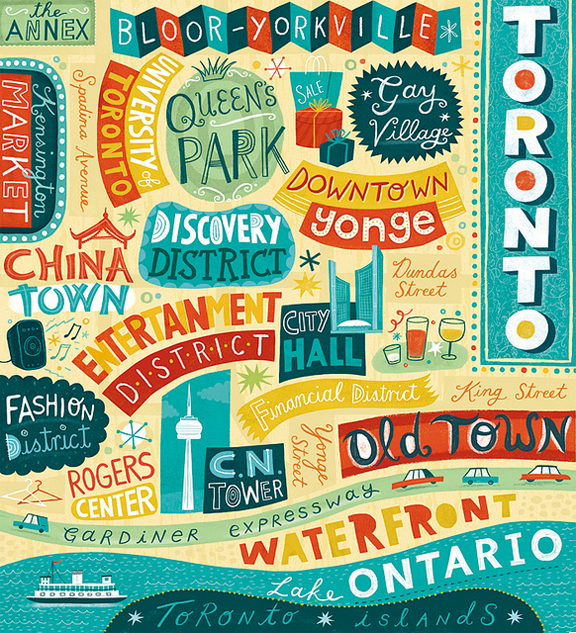 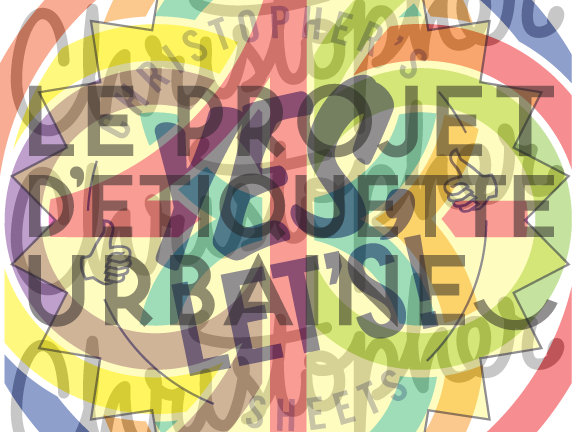 This is what my brain looks like right now. I apologize for my blog absenteeism this week - things have been pretty busy around here. Lot's of exciting new stuff coming your way in the next 3 or 4 weeks... please stay tuned!

Have a great weekend. 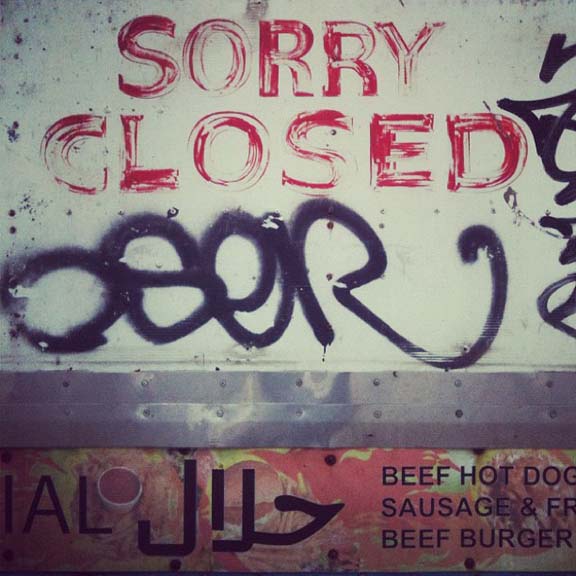 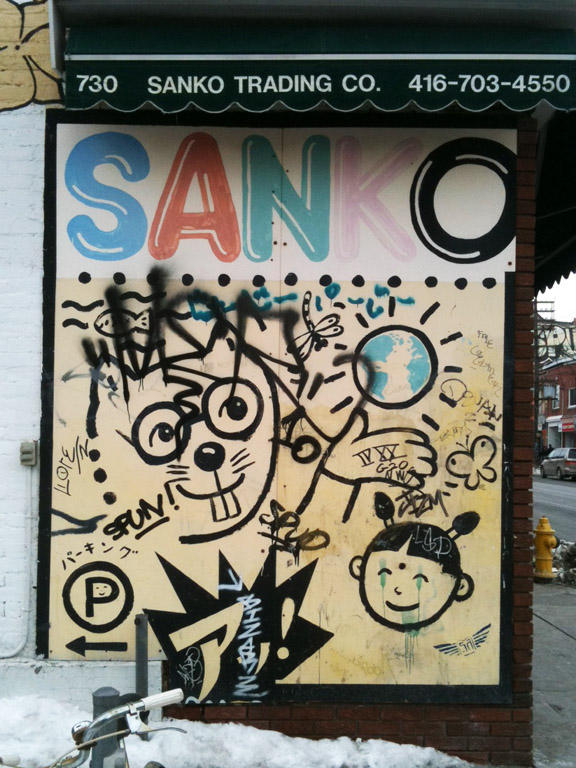 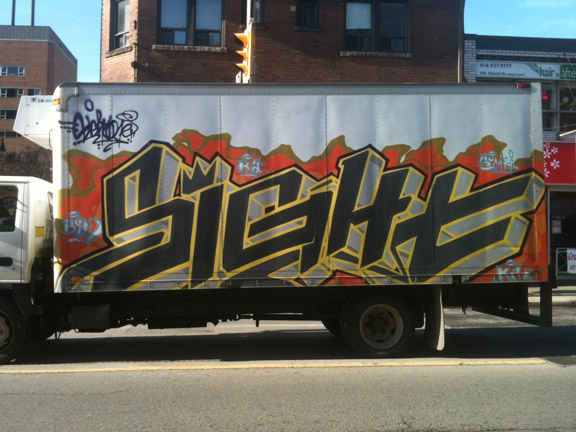 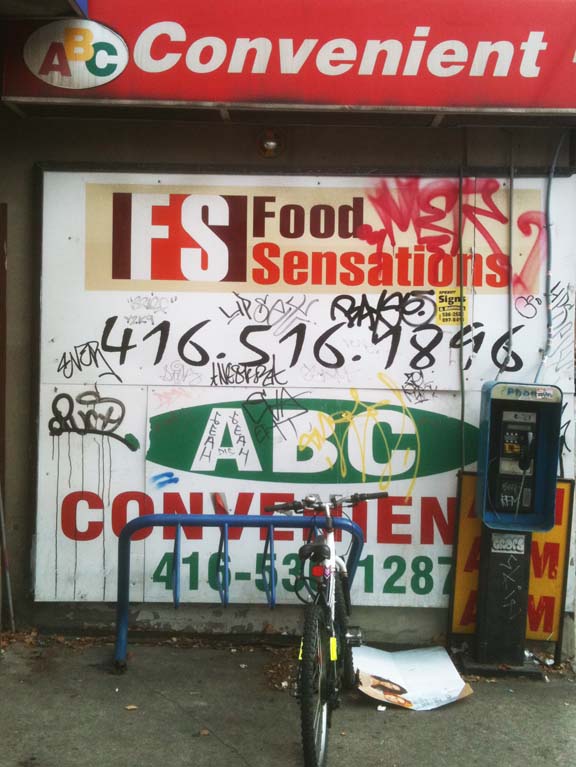 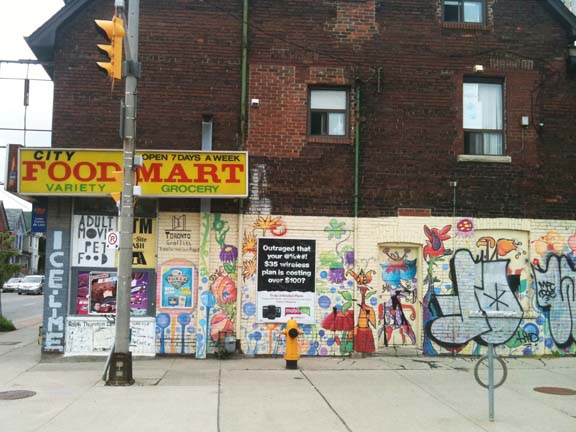