I first visited Toronto in the spring of 2007, and fell in love with this city. Growing up in a small town in Saskatchewan, and then in Alberta for 8 years, I had never experienced a living, breathing metropolis. This city was alive. And through a series of fortunate events, I was able to move to Toronto in June 2009. The love affair began.

Shortly thereafter, the honeymoon period subsided, and I started to notice that some of the stereotypes that Western Canadians purport about Toronto were kind of true; depending on the day, Toronto could be quite fast-paced, impersonal, and, well, rude. On a Friday afternoon in downtown Toronto in the middle of an August heat wave, you won’t see a lot of smiles or hear a lot of niceties; you’re more likely to hear car horns blaring and see the occasional middle finger.

But let’s step back and look at a few statistics. According to Wikipedia,
In June 2011, a Toronto Star interview caught my attention. Entitled “Torontonians more and more rude: etiquette expert”, etiquette expert Linda Allan suggested that “indications of incivility are increasing”. But after examining the causes (which included our city's size, diversity and extreme temperatures), she ended the article with a glimmer of hope:


“...while many are quick to be rude, the rest of us are often too polite to say anything. […] Thankfully ... it’s perfectly polite to point out bad manners, so long as it’s done as discreetly as possible without raising one’s voice or using profanity. Indeed, it may be the only way things will change."

This paradox stuck with me. As Canadians, we seem to be programmed to resist confrontation, but at the same time, we are also known for our friendliness and generosity. We want to make things better for everyone, for the greater good. How could we align our passion to help with an obvious need improve overall public manners and etiquette?

I checked the interwebs, and as it turns out, this has been a common concern in Toronto. In 2006, the blog Torontoist released these 4 etiquette citation cards combating Parking Etiquette, Transit Etiquette, Entertainment District Etiquette, and Personal Hygiene Etiquette: 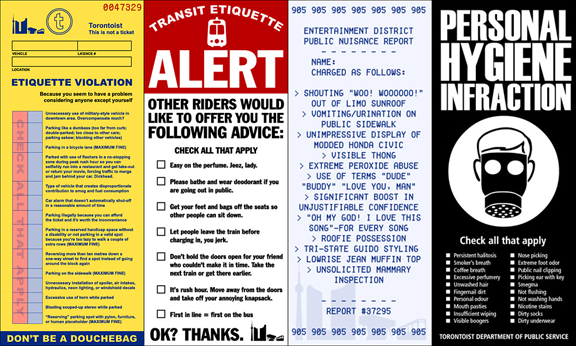 And then in 2010, the National Post newspaper unofficially formed the TTCC, the Toronto Transit Civility Commission, which included 4 transit-focussed posters aimed at transit users who trim their nails, don’t tend to their body odour, listen to music loudly, and hog seats on public transit:

Even across the border, New Yorkers seem interested in this concept of urban etiquette. In June of 2006, New York Magazine released “The Urban Etiquette Handbook”, which thoroughly outlined a series of “rules for getting along in an endlessly wired, ruthlessly crowded, sexually libertarian city.” The topics included: The Office, Cell Phones / iPods, City Living, and Subway / Cabs. As well, New York artist Jay Shells has garnered some attention for his “Metropolitan Transit Authority” project, which included these 4 sassy installation pieces:

And outside NYC, I would be remiss not to mention the valiant effort by Chicago-based studio Coudal Partners back in 2004, and their SHHH cards (the Society for HandHeld Hushing), which specifically targeted cell phone users: 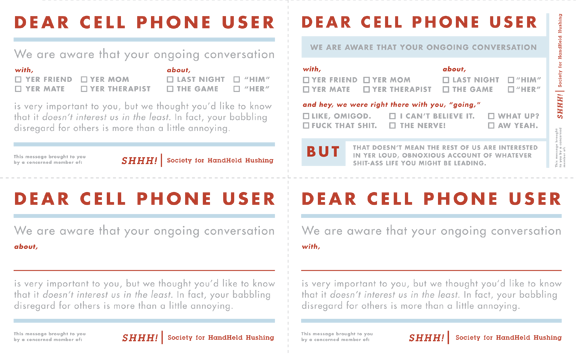 More recently, an interesting not-for-profit campaign that popped up in large cities across Canada (including Toronto) was called the People For Good campaign, spearheaded by Zak Mroueh (of Toronto’s Zulu Alpha Kilo) and Mark Sherman (of Montreal’s Media Experts). With their large-scale posters and billboards (and a companion iPhone app), their objective was to “make the world a better place, one good deed at a time.” When asked for comment by the Globe & Mail in July of this year, Mroueh elaborated that “something like this can make people think differently, truly think more positively.” I couldn’t help but agree. 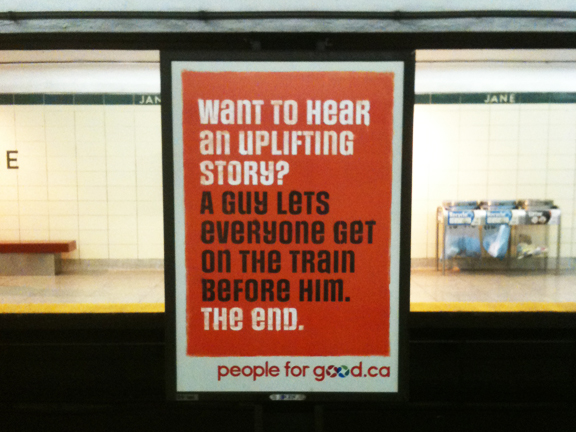 This is how Toronto Etiquette Project was born. I wanted to create a mini-campaign of my own, amalgamating the best parts of all these endeavours, improving upon their shortcomings, and incorporating my own creative sensibilities. My 5 objectives from the outset were always:
I also wanted to pay tribute to one of Toronto's iconic landmarks and, one of absolute favourite things about Toronto, the TTC subway stations: 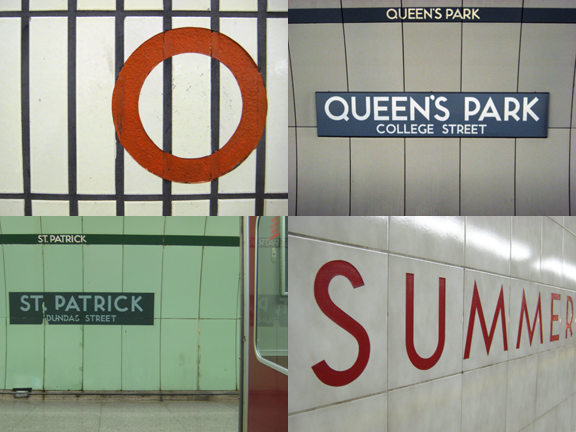 Here are the final results:

I focussed on the aforementioned idea that it’s perfectly polite to point out bad manners, so long as it’s done as discreetly as possible. These 5 cards can be printed at home or work (in colour or black and white), and used discreetly in the most common violations of public etiquette in Toronto (as compiled from personal experience, suggestions of friends, and online blogs and forums). 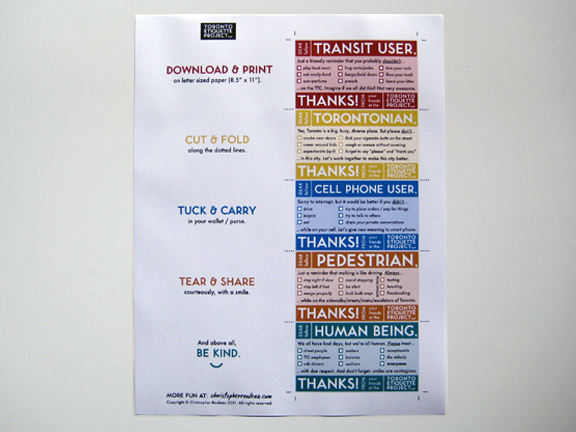 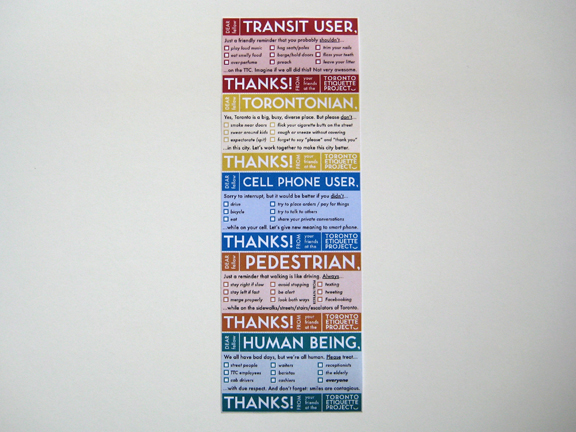 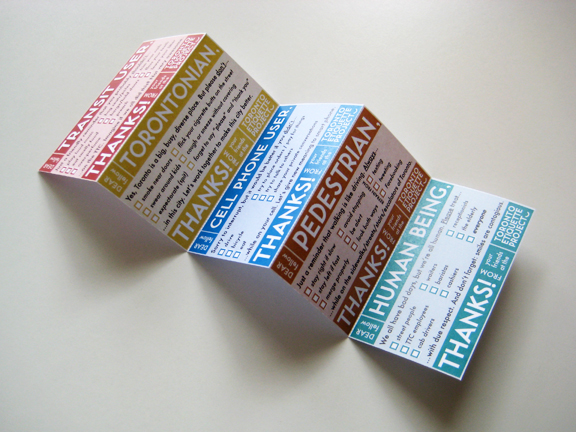 As long as people approach this project with a sense of playfulness and reasonable discretion, I feel that these cards have the potential to 1) improve public etiquette in Toronto, 2) engage people in human-to-human discussion and 3) put a smile on people’s faces. Inspired by the words of Robert Wong, (Executive Creative Director at Google Labs) at the recent Design Thinkers conference in Toronto, designers should always strive to help and delight.

On November 10, 2011, the Toronto Star proclaimed that Toronto is still the most least-liked city in Canada, especially by our Western friends in Alberta. And while my love affair for Toronto continues, my Western roots can’t ignore some of the cold, hard, nasty truths of modern metropolises like Toronto. Call me a dreamer, but I don't believe this has to be this way. Did you know that Toronto used to be called "Toronto the Good"? My hope is that the Toronto Etiquette Project will offer a fresh perspective on Toronto’s infamous civility problems, and will reinvigorate people to engage in collective, positive change.

So, let's get this started. View the companion site here, or download the cards here. And please email and share the links on your social networks so we can get them in as many hands as we can. 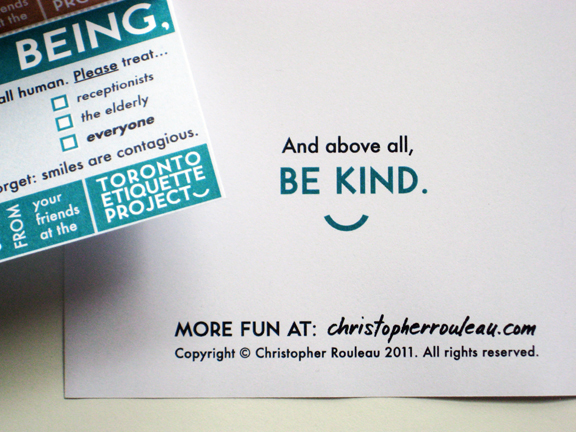 “Be kind, for everyone you meet is fighting a hard battle.” - Plato

p.s. I am always open to hearing feedback, criticism, recommendations or revisions. Please send me an email or find me on Twitter.